what happened during my silence

I haven’t posted anything new for a while because of reasons such as laziness and lack of time. I attempted to post things, though. The problem was that I didn’t feel like it during the past few days. I couldn’t type anything but nonsense since I wasn’t really in the mood to post anything. But this day is not like any other. It’s been exactly one month since the birth of The Terminator—and Alyzza’s 17th. Yay! So to mark this important day, I’m going to blog about stuff—a lot of stuff.

UPCN holds a party called Nursecissism every year. In that party, every batch needs to present something that reflects the life of a student nurse in UPCN. Our batch had prepared quite a long skit for the program. And guess what, I was one of the Santinas in the presentation! I was one of Santinurse’s ‘holy’ assistants! My friends couldn’t believe it at first. They thought the role didn’t fit me at all. (Of course, it didn’t!) And what’s worse is that my goody-goody friends were the ones who were cast as the villains. LOL. Moving on, the party was fun! Sure, our presentation was garbage compared to the senior’s, but I’m really proud of what we had presented. We even won an award for it! And the audience found it funny…I think. O_O

That’s about it for Nursecissism. Just click here for more pictures.

During the week-long vacation, I was in Muntinlupa. I bonded with my family, and played with my nieces. I stayed home all week. Well, except for one day when my parents and I went to the mall to do some shopping. I also remember turning down an invitation from my friends to go to the mall. Well, you can’t blame me. I was feeling really ugly during that day, and I didn’t want to be seen by anybody. (Especially by high school friends) They might say, “Ay, anong nangyari kay Joyce? Bakit ang pangit na niya?” It’s called stress, people!

I’ve picked up a new expression from my block mates. ODK. It means “Oh Diyos ko!” It’s conyo AND nationalistic (since it's in Filipino). Try it. And use it as often as you can when surprised or when you simply feel the need to say something. Just remember to use a conyo accent. Oh-deee-kayyy,it’s so mainit naman here.

I’ve never laughed so much because of a video in my entire life before! Really. Ryan Higa makes such funny videos. I discovered Niga Higa with the help of my block mates. They were talking about it one day, and they told me to go to Youtube and watch some of Niga Higa’s videos. Hell, they’re funny! My favorites, so far, are the I’m a Chingstah video and the How to be Gangster video. Go on. Watch them. I AM FORCING YOU.

Attempt to smile in a demure way in photos

I just wanted to look not so ‘galak na galak’ in pictures, so I practiced smiling without showing my teeth. Two words. EPIC FAIL. 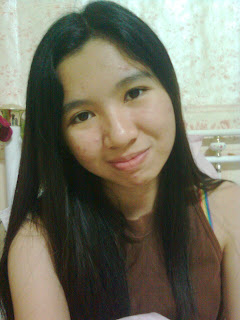 I call this picture "The Rainbow"

Another test flunked in Comm I

I didn’t really flunk it. I passed—barely. 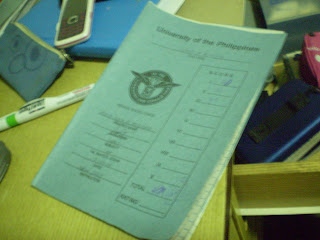 It was another of our outlining quizzes with some précis writing and paraphrasing. I managed to get everything right except for the freaking outlining. Hell. But I’m really thankful for our kind Professor who did all that she could to make sure all of us passed the test. I got a whopping 2.25 instead of a 5! LOL. It doesn’t really matter to me. I’ve been through worse things. I really just want to pass the course and move on to the next semester. :3

I guess that’s all for now. I should really go to bed early tonight. We have a socio test tomorrow.ODK!

Niga Higa = lol. My brother and I used to watch them a lot during summer. Epic guys.

O_O Now I'm more curious about your Santina play. Maybe someone caught it on video?

@Kriselle- Really? So, are you a gangster now? What's your favorite Niga Higa video? :))

On video? I doubt it. All of us (my batch) were on stage that time. I don't think the higher levels cared enough to have it recorded. :))

now i know the meaning of ODK. HAHA. thanks. :D

i wasn't able to watch that gangster video last night. O_O it took me an hour to buff half of the video and i'm getting sleepy. screw youtube. haha. wait til i get to load it completely, i'll download it for you. XDDD

I THEREFORE CONCLUDE THAT I'M THE COMPLETE OPPOSITE OF MY BESTFRIEND. :) i CAN'T do that galak na galak smile. hahahahaha. weird. O_O

Download it now! You don't know what you're missing. :)) You'll never be a licensed gangster without seeing the video. (Wait, gangsters need to have a license?!)

I know, right? We're opposites! It's hard. Whenever I see a camera, I smile with all my teeth (up to my molars) visible. O_O Even my ID pictures are all so 'galak na galak'. :))

Vacation talaga tawag natin, 'no? Haha. I use the same word. And I got too obsessed with Zac Efron and addicted to Resto City during that vacation.

Too bad you didn't join our trip. I should have had a date, lol.

Don't worry about the 2.25. I had the same experience with Kas1. Haha. With essays and stuff, ugh.

About the smiling, I can't smile without showing my teeth either! When I try to smile [with no teeth], I look like some weirdo who's being pointed a gun from behind forcing her to smile.

@Alyzza- Wait, how did you become obsessed with Zac? It happened to me once. I got obsessed with Joe Jonas because of Camp Rock (my niece and I used to watch it EVERY SINGLE NIGHT last summer). But I've forgotten all about it because of that stupid Single Ladies video. :)) Restaurant city? Let's trade ingredients!! :D

Yeah, you should have had a HOTT date. LOL.

Next time? Watch them NOW.

Yay. I'm not alone! At least we passed, right?

I feel your pain. I look like I have something inside my mouth whenever I smile without my teeth showing. :(

i have the same name spelling as erine. :)) you're still as confused as ever. i'm so going to hack you with my ax.

I watched 17 Again a few weeks ago and ODK, he's the HOTTEST. I know understand Kriselle's feeling. Haha. ODK, I must stop or I'll talk about Zac's hotness forever, lol.

Hey, 2.25 is not THAT bad. And yes, at least we passed. Haha. Stupid paraphrasing stuff.

@Alyzza- Haha.It's okay. Talk about his hotness. :)) Maybe I should watch it too?

ODK, you should! You MUST!

Zac Efron? Joe Jonas? ODK. What about me? JOKE.

Well, I still have to make a literary paper and some more projects, and take one optional finals to get my grades up.

Niga Higa is the shiznit!

yes, the passion of the christ. did you see me, the one with the serpentine eyes? HAHA.

@Pyrotechnics- So THAT was you? Nice acting, dude. :))

@terminator - gee. thanks. people in hollywood sure don't recognize the "talent". :))