I Don't Want To

My Mom and I went to the mall this afternoon. She had to go to the bank and do some stuff there. Luckily, right in front of the bank was a large book clearance sale. (Yay!) So automatically she asked me if I wanted to stay there and rummage for books while she went inside the bank and did her thing. I was screaming inside since my original goal was to buy just one book (for financial reasons) from Powerbooks or whatever. And when I saw THAT, I was ecstatic.
I carefully went through the neatly stacked books and scanned for nice titles like 'Kill Me, I'm a Dolphin' or whatsoever. There were lots of books to choose from, and they came at such low, low prices. There were books worth 20 pesos! They were those teenybopper novels though. So I went around the place looking for a potential good read. I I planned to get a handful of books and then choose from those in the end. However, it didn't turn out like that. I ended up buying every book I got interested in. (Oh well)
I was shocked when I found a hardbound copy of Maximum Ride so I snatched it immediately from the stand. All of the books I bought, except for Maximum Ride, were all brand new. It was still in good condition, and it really was a bargain. It was worth 80 pesos only! After that, I walked around some more to find some more books. One of the salespersons was already bugging me and offering her assistance in carrying my books. I happily declined. I considered that as an insult to my machismo. But in the end, she wound up carrying my books because I had to kneel down and look at the books down below. I spotted some books by Stephen King but knowing how boring some of his books turned out to be, I skipped out on those. I've become more jumpy and anxious ever since I started reading his books so I try to stay away from them. Right now, I'm in the process of finishing Stephen King's It. Hell, it's as boring as your grandmother's boobs. Moving on, I ended up buying five books. (see picture) 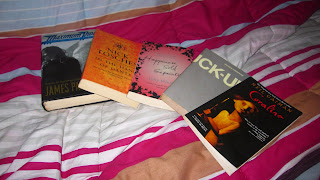 My reason for buying Maximum Ride was because I found it really cheap. It's a good book, it's a hardbound copy, and it costs so less. Who wouldn't buy it? I bought In the Hand of Dante simply because I was intrigued by its plot. It's somehow related to Dante's Inferno, and just last year, I bought Dante's Inferno from another book sale. As you can see, Happiness Sold Separately is quite different from the books I usually read. That's exactly why I bought it. I'd like to explore that genre more. And yes, reading the first page got me hooked so I placed it in the growing stack of books I was hugging. Next, I bought The F*ck Up because I found the plot hilarious--very, very hilarious. It's about a guy whose life gets, you guessed it, so F-ed up. He even ended up having to pretend to be gay just to have a job--being a porn star for a gay porn film. (HAHAHA) And of course, I bought Coraline simply because IT IS CORALINE.
There you go, the five books I bought today. Believe me, they cost me less than 500 pesos. No, not 499--420 to be exact.
Shopping for books always beats shopping for overpriced clothes that all look the same anyway.
I need to go now. I need to finish reading Coraline.
Seriously.
Posted by Joyce at 8:21 AM 4 comments:

Regrets.
I don't really have a lot of regrets, but there is one thing that would have changed my life...big time.
I want to go back in time.
I should have gone yellow.
Posted by Joyce at 4:51 AM No comments: