“Learn to just chill. Celebrate the exuberance of life.”

This afternoon, our Philosophy I class formally ended. And I’m sad about it. Strange, huh? Normally, I’d be as happy as a prisoner who finally received his parole after 50 years in jail. However, it’s the other way around. It’s not like I’ve turned into a geeky philosopher who would like to sacrifice her term break for the sake of learning. It’s just that…I’d really miss my professor.

Earlier this day, I was having second thoughts about going to school because of the following reasons:

a. I was suffering from drug overdose.

b. I was feeling so ugly because of the monstrous zits on my nose.

c. It was too hot outside and I had to walk. (sorry, this may sound so lame)

However, I chose to go to school because I remembered our professor telling us that it would be our final meeting. And really, being the sentimental monster that I am, I wouldn’t have missed it for the world. So there, feeling really ugly and nauseated, I still attended our class—our final class.

At the beginning, it didn’t look like it was going to be a very special meeting. I thought it would be just like our other classes. By the way, the results of our epic $ 9,000 exam were released as well as our grades for the course. And yeah, I’m pretty happy with the results. They make me want to go out and paint the town red. (Yeah, baby) 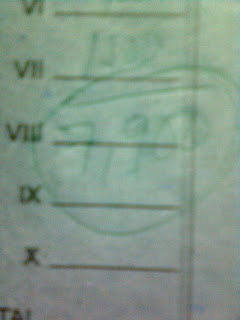 Moving on, after getting our quiz booklets and class cards, things started to become sad and mushy. Our professor stood up, told us something about enjoying the semester with us, and pulled out a bunch of letters from his plastic envelope. He wrote each of us a letter! Everybody let out a long “Awwww”. Then he turned the letters over and boasted about the Hello Kitty stickers he had used to seal them. LOL. He then distributed the letters. 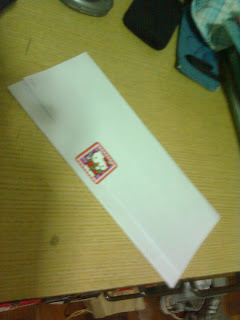 Do you see the Hello Kitty sticker?

As he handed me the letter addressed to me, he added, “Ayan, bagay na bagay sa personality ko yung mga stickers.” I laughed really hard when he said that. Why? Well, he plays in a band and has a lot of piercings. I really don’t think Hello Kitty is the right cartoon character for him. O_O

Moving on, he gave us time to read the letters. The letters all said the same thing, but the message was really well thought of. I was deeply touched. :c

He then moved on to his ‘last’ words. And yeah, at that point, I was already feeling really sad. Never before have I felt so sad about saying goodbye to a teacher. :c

Our class then ended with a photo op. But pictures weren’t enough for the boys—they all rushed over to our professor and hugged him. It seemed like everybody wanted a piece of our professor—including me. 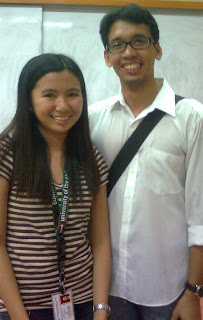 I’ll definitely miss our Monday and Thursday ‘chill’ time. I really enjoyed our Philosophy classes. He may forget our names, just like what he told us today, but I’ll never forget his. To be exact, I’ll never forget him. He’s definitely one of a kind. And I’m so grateful that I was given the chance to be his student even for just one semester. Thank you, Sir Tius. :)

One of the best teachers, ever :)

Couldn't agree more with this post. I'm gonna miss Philo so much. The best subject I've had this semester. With a rocking teacher to go with it. :)

Isn't it ironic? We feel sad because we're going to lose our teachers [and never see them again]? Maybe this is how things work in college, teachers come and go. And what's worse, they're very good teachers! Yours is a very sweet one.

Hey, you don't look that bad.

@ella- I know. :c It's also pretty obvious that you had so much fun with philo, Ms. Always-getting-the-highest-score. :))

@alyzza- Yeah.:c One semester is never long enough for one great teacher. :c He IS sweet! :D

Whoah, whoah. Let's not forget who the goddess queen is. :))

Reading this is so nice. Our classes ended without much... stuff. Except for Fil11 (which traumatized me as I've written). I guess the closest I got to being emotional was for my Chem teacher because I wrote him a heartfelt 'review' (since we review teachers after every sem) thanking him for making me love Chemistry for the first time (yes, I know, I really wrote that /brb as I slap myself) and how he's an awesome teacher and that stuff XD That was anonymous, though.

Your teacher was very thoughtful and sentimental! I would love to experience getting a letter from a teacher because I never had.

@Kriselle- It's weird. We make such a big deal out of the 'last classes' with our professors. I think we all had group pictures taken with our last three professors. Oh well. We ARE a sentimental bunch. I almost cried during our last Math 11 class. I'll miss algebra. :c

And wow, I wish my chem prof next sem will make me love chem, too. I am a chem loser. And I blame it on our loser chem teacher in hs. (bitter pa rin no?) =)) I used evaluation tests to avenge my spirit against our bipolar professor last sem. =))

Awww. I'm sure you'll get one in your next semesters. :)

Joyce, I'm sure you're just under some spell. We perfectly know who the goddess queen is. *ehem, you* :))