Even though it’s a Wednesday, I forced myself to wake up and drag my body to school. I had two reasons why I needed to. First, we had a meeting about our NSTP presentation to be held two weeks from now which I am inviting you all to watch—if ever you guys have time. Second, the first round of the debate was scheduled today. But due to the stormy weather, it was postponed.

I didn’t know how to react at first. I had mixed emotions regarding it. I really didn’t want to prolong the agony anymore. But then again, having it rescheduled meant having more time for me to revise my speech and actually rehearse delivering it.

I was supposed to get out of my bed at 6:30 a.m., but when the alarm woke me up, I reset the alarm to go off at 6:45. And when the alarm woke me up at 6:45, I reset it again to 7:00. O_O And I was supposed to be in the meeting by 8:00! Realizing how late I was, I got up and searched for breakfast. I didn’t have an appetite, so I just ate chocolate chip cookies really, really slowly. I was even talking to Bless while eating. I acted like I had all the time in the world.

After consuming the whole pack of Chips Ahoy, I started getting ready for the meeting. By that time, I was sober already.

As expected, I arrived late. I got to school at 8:30 a.m., and the meeting had already started. Good thing they just ignored me as I entered the meeting area. Mind you, I had to walk down the aisle since the only available entrance then was the one at the back of the room. Well at least I attended! And I wasn’t the only latecomer. :)

Sugar really had its effects on me. I was extra-hyper all morning! I was taking pictures of people, dancing out of cue, and saying nonsense to everybody. Really, I was insane. 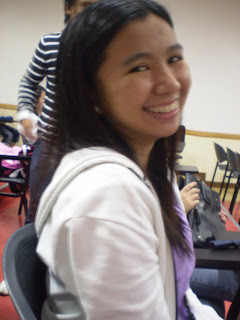 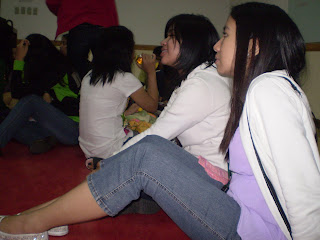 After the meeting, my group mates and team mates for the debate decided to eat lunch together. But on our way to Robinsons, strong winds and rain attacked us. By the time we got to the mall, our shoes were making squishy sounds, and our pants were all wet.

The group decided to eat in McDo even though I was forcing them to eat in Chow King. Of course, majority always wins, so I had to forget about my longing for the sumptuous fried dumplings. In McDo, my insanity continued. But by that time, my friends were insane as well. We were talking about niggers and stuff. I still don’t know why I told them I was a transsexual and in my past life, I was a nigger. Hell, just look at what sugar does to people. O_O

A funny conversation in McDo...

It was kind of weird then, because McDo was already playing Christmas songs! And in between the Christmas songs, they either played Nobody or some other pop song. Of course, we danced to the beat. 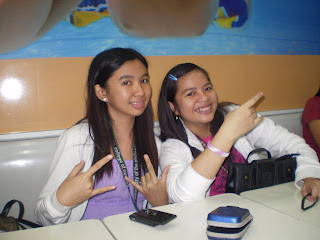 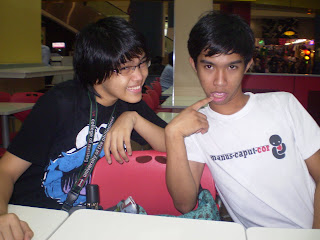 harriet and danj acting like girls (wait, harriet IS a girl O_O)

It was also there in McDo where Ella received a text message from the facilitators of the debate saying that it would just be rescheduled due to the weather. T.T

We left McDo after a long while, and my friends acted like my entourage as I looked for a nice dress. We went to different stores, but I still didn’t find any dress. Later on, I just gave up. My friends went home, and I was by myself.

On my way home, I passed by Bench and saw a really cute dress. So I went in, tried it on, and bought it. And then I remembered something I needed to buy, so I went to the other side of the mall to buy it. My legs and feet were aching then, but I still managed to go back and forth the Padre Faura and Pedro Gil wing of the mall. Sigh. The things I do for love.

When I got home, I went straight to my bed and lay there for hours. It has been such a tiring day.

Hi, Ate Joyce. I noticed that the drama queen account in LJ will not be updated anymore. LOL. I was following your blog in LJ. :D

Wow, college. T_T I want to hurry up and go to college already.

You never changed. You still eat a LOT. Hahaha. I know what presents I'll give you - food. LOTS of food. :))

Sigh. The things I do for love.

I mentioned something like this on one of my blog posts last December. Funny, right? You do tiring things but you like it. Things we do for love. Haha.

Yeah, you should work more on that 'gangsta' pose. Haha.

When's the exact date for the NSTP presentation?

And, yeah. Attendance is a must. But quite frankly, attendance is just being there during the event, not the entirety of it. Hahaha. Good thing it doesn't happen to any of my classes, just org meetings.

Yeah, college sure is fun, but you'll keep on missing your old life (esp. your friends) once you enter college. T.T

@nemesis- I was born a glutton. And I'll die a glutton. I'm looking forward to your presents. :))

I need a dress for a special occasion. ;)

@pyrotechnics- I know, right? But wait, have you heard me talk gangsta-ish? :))

I know. I caused riot the whole meeting. BUT they thought my foolish ideas were useful. :))

Yeah. I got that from Courage.

@effie- I know. She's quite handsome in personal. But she IS a girl. And she's not lesbian. She has a number of male crushes. :))

What's confusing is that, she can be pretty AND handsome simultaneously.

You were... so... something that came out of a union of hyperactivity and being sabaw. The nigger conversation was so random, lol!

But still, you sounded like you had lots of fun so good for you! :)