I never thought I’d watch this movie, but I guess I just did.

I got home early from school because we got dismissed early in Philosophy which was our last class for the day. I went home immediately to finish reading The Orange Girl and finally start reading The Lovely Bones. As I was in the middle of reading the first chapter of the latter, Bless came in my room and asked me if I wanted to go out and catch a flick. I said yes. And that was how I watched the movie I never ever thought I’d watch.

I got dressed in an instant. I had nothing else to wear so I wore shorts and my trusty blue long-sleeved shirt with stripes plus my glittered white mary janes. In a few minutes, Bless and I were walking to Robinson’s. I asked her what movie she wanted to watch. She told me about this movie whose title I can’t remember by now. All I remember about it is that it’s a chick flick. O_O

When we got to the mall, we found out that the ‘chick flick’ Bless had told me before was still not shown in the cinemas there. We had no choice but to settle for another film. So we were picking between The Grudge 3 and In My Life. Okay, so our choices sucked and maybe you guys think we should’ve automatically chosen, without even thinking, The Grudge 3. But I’m sorry to say that we did NOT choose the horror film. Instead, we chose to watch the film about gay men. It was a really hard decision to make.

Before going in the theater, we ran around the mall to run an errand and buy some food to consume while watching gay men grope each other. We bought burgers from Hot Shots and went back to cinema 3 to witness a one of a kind film.

When we got in, we were surprised by how many people were there. We had to go to the highest seats to be seated because the theater was packed with people. I guess a lot of Filipinos DO want to watch gay men groping each other. Oh well, you’ll never understand how the human mind works.

So I’ve grown fond of putting conversations in my posts. If you have a problem with it, close the window and curse yourself for being such a loser. And if you don’t, keep on reading.

While looking for seats…

I looked for the nuns, and then it hit me. THEY WERE RIGHT IN FRONT OF US. All three nuns were looking at us. I just laughed it out and continued walking toward the upper seats away from the nuns who, I think, had heard Bless shout.

The movie was fine, but my focus was on eating my burger. It was really delicious. It was a really large one with loads and loads of stuff in between the buns (So much for being on a diet). Going back to the movie, it was good since it was a mix of comedy and drama—and some shocking moments. Bless cried A LOT. I just laughed at her (Sorry, Bless). I kind of liked the movie. John Lloyd, Luis and Vilma all did a great job.

My favorite part of the movie:

Luis: Nung naging salutatorian ako, you were not satisfied.

After the movie, we went to the department store because Bless had to buy something. On our way around the mall, I remembered the awkward moment we had with the nuns.

As I reenacted how Bless reacted inside the theater, out of nowhere, THE THREE NUNS CROSSED OUR PATH! Now that was freaky. We just laughed and laughed.

After that, we went to the Mini Stop branch near the mall’s entrance. I bought an ice cream cone. Yay me.

So this post is pretty much sabaw because of a lot of different reasons. By the way, I almost forgot to tell you what happened to our debate. I’ll just tell you this. We lost in the same way we won prior to that. 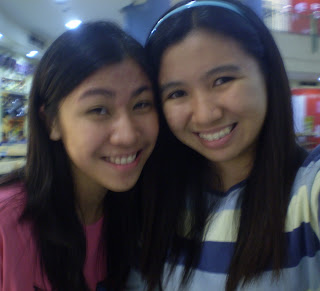 I secretly wanted to watch that movie because I have this huge crush on John Lloyd Cruz and I still can't fathom why he accepted that role. Waaaa~ T_____T

LOL @ the nun part. I usually have those kind of moments and I really really suck so... :))

@Aina- Really? You have a huge crush on him? Don't worry. He did a great job in this movie. And it's all that matters. He's just 'pretending' to be gay, anyway. :))

The nuns were STARING at us. O_O

Were you supposed to be watching The Ugly Truth? Oh, well. I'm glad you didn't choose The Grudge 3. I didn't appreciate it. [insert negative comments here] Maybe we should have watched Final Destination 4 instead. We're running out of good movies to watch, lol.

Maybe the fact that Vilma Santos is in the cast was the reason many people wanted to watch men groping each other. I loved the dialogue between Luis and Vilma, so Pinoy drama. I can so imagine Vilma Santos.

The part about the nuns were scary, really! Aren't you afraid that they're watching you right now? Haha.

I was just wondering, at the "Dapat UP," did the audience really cheer? Wahahaha.

My mom's convincing me to watch the movie. I said I'd go if there's food involved. :)

Nuns? :)) I have quite a number of experiences similar to yours before. At least you don't know them. I mean, the nuns I encountered were those leading my school. O_O

@Nemesis- No. I think it sounded like "I love beth cooper" or something like that. Sorry. I'm not really updated. :))

Maybe. Vilma really has a lot of supporters. And she's known to be such a great actress. She really is! :)

I know. They were following us!

Yes, they did. Robinson's Place Ermita is somehow like an extension of UP Manila. :D

So what did they do to you? Did they punish you every time you had those moments with them?:))

@the terminator - I just watched the movie. It was good... but awkward. :)

Nope, they did not punish me. We just smile at each other and pretend like nothing's happened. Haha. Or they could be secretly exacting revenge whenever they make me do so many things in school. :)) Who knows?

I SHALL WATCH THAT MOVIE (if I still have money by the end of the week). 8D Louise watched that too and I'm thinking that maybe I'd get the same reaction 8DD (Probably alone since my roomie doesn't watch yaoi) Nagtataka ako kung bakit makapal make-up ni John Lloyd sa picture. About homosexualities pala. :))

@kriselle- I'M SURE. You'll like this movie. :) There's not much kissing, though. I can only think of ONE scene wherein they kissed. Oh whatever. There were some pretty sweet lines. :) It was pretty awkward since, you know, they're both guys.O_O But I guess you're the type who'd enjoy it. :))

Sabi na, Kriselle would respond something like that. *frowns*

Yeah, you're right. From the poster itself, it's a chick flick. "I Love Beth Cooper".

Still can't get over the nuns part, too, though.

@Pyrotechnics- Haha. Do you want to watch it? Your treat. :))