The past few weeks were really toxic for me. With all the exams and activities, I had no more time for a much needed R and R or, in other words, detoxification. So now that I’ve gone past some of the obstacles, I found it appropriate to give myself a break. And of course, it was also for celebrating a special day that you guys probably know of by now. But what happened in my ‘detoxification’ isn’t the only thing this post is going to be about. There were two major happenings today. So let’s get moving. Let’s start with the first one.

Okay, so the agony was prolonged because the debate was postponed. So instead of facing our fears last Wednesday, we had to face it today.

Actually, we were in danger—at first. It was because Ella was caught in a traffic jam in Cavite. For us to be validated, we needed to have at least 4 members of the team in the venue at the start of the contest. Ella was going to be late! So she contacted Erika, our substitute debater, to come and fill her spot until she arrived at the venue. But later on, Erika was stuck in a traffic jam as well! There were only three of us in the venue and it was already a few minutes before the start of the contest. Luckily, it got delayed because of ‘technical’ difficulties, and both Erika and Ella were able to catch up.

At 2:00, we were all asked to go inside room 308, the venue for the debate. The other contestants were there as well and were really busy revising and preparing their speeches, and that’s when I started getting nervous.

After introductions and other stuff, we moved on to the first match involving Biochemistry Block 11 and Nursing Block 25—us. The facilitator asked us to come in front and be seated. There were seats arranged for the debaters already so we took our seats in order. I took the first seat because I was the opposition leader. By then, our opponents still haven’t arrived. So for formality’s sake, they asked us to wait for five minutes. Because according to the rules, if our opponent still didn’t arrive within five minutes, we’d win by default. So we sat there and waited. And after five minutes that seemed like forever, our opponents still didn’t show up. Our team was declared the winner for the first match! Okay, so it was by default. But at least we still won. FYI, luck is a skill. The audience still applauded for us and shouted, “Ang galing niyo! Congrats!”

After being declared the winner, we went back to our seats in the audience. There was a ten-minute break before the second match, so we just talked about our luck. Later on, I asked for permission to leave since I had other plans for the afternoon. ;)

Because of the Depex yesterday, Ken and I weren’t able to properly celebrate our special day. So we just celebrated today.

After the debate, I went back to Astral and got dressed for my date with Ken. Later on, we met in front of Astral and went straight to the Mall of Asia.

To eat pasta from Pizza hut

To eat the fondue from Haagen-Dazs

To buy donuts from Krispy Kreme 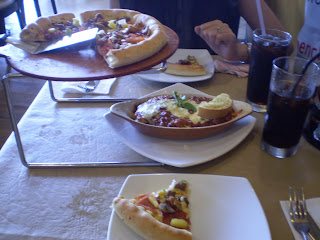 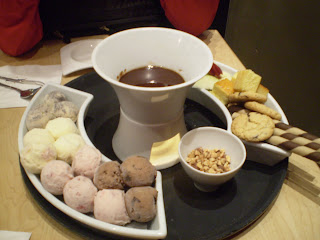 In between accomplishing our objectives, we walked around the mall. But that was it. We just looked around because we were saving our money to eat more and more. You see, food is one of the things that keep us together.

During our stay in Pizza Hut, we gave each other our presents. My present for him was a watch from Timex plus a greeting card. His present, or should I say presents, for me were two books I’ve always wanted and a custom made purity ring. He had a pair of purity rings for us with ‘true love waits’ engraved on them made from Silverworks. I think it’s just sweet that he insisted on having purity rings made. It just proves that there are still men in this world who believe that we should all wait until after marriage. 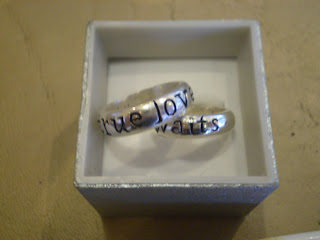 On our way out of MOA, we passed by the wishing fountain near the entrance. I pulled him toward it and pulled out coins from my coin purse and handed him one. When I was about to throw my coin…

Ken: *glares at me* Hindi nga?

We left the mall soon after that.

When we got to Astral, I took Ken to the rooftop where we looked at the city lights. It was raining then so we had to take umbrellas with us.

Later on, he went home. And that’s how our date ended.

This day has been really fun and full of surprises. After having such an unfortunate one yesterday, I think I really deserve this.

This is all for today. I need to rest…badly.

Wow! Congratulations! With or without default!

Again, congratulations! I already told you everything I needed to say.

Good grades? *hits Joyce* But you're funny. I can see myself doing that. :))

You guys are so sweet. I envy you because your anniv falls on a schoolday, lol. I spent all my April 5's [with him]enjoying the summer with my family. Oh, well.

Congratulations for the three years! If ever, make me your bridesmaid! *glares at Effie* Bwahahahaha.

For everything that happened, good for you.

@Alyzza: Why glare at Effie? Will this be the new movie "The Bridesmaid Wars"?

Hope you bring me with you on the next April 5!

Why should I bring you along?

@pyrotechnics- Haha. Thanks. But it's sad since I never had the chance to deliver the speech I worked so hard for. :(

WHY? I DO want good grades. I wasn't kidding during that wishing mountain part.

I think yours is better since it's not on a school day. It's hard for us to find the time to celebrate.

Joyce! I love this post so much. I once believed love was nothing more than jibberish men made to amuse themselves.

I am so happy for you two. If ever, I would also be having my own celebration one month from now. Ang sad. Haha. Anyway, I'm glad someone like Ken makes you happy. I'll pray for you guys. :D

P.S. Ang sarap ng food niyo! Haha. I can be gluttonous myself, too bad I have a slow metabolism and can't enjoy myself. :D

@bluedolphin- Thanks, Ella. :) I'm glad your belief about love has changed. :)

Don't be sad. The right guy for you will come when you least expect it. :)

the wishing part can be made into a movie. hahaha. I really find it sweet.

anyway. more years for you and ken. :)

AWWW Reading this made me feel all warm inside. Your relationship is the type that really makes other people smile as it goes on. I'm so happy for you both. (And so jealous of the fondue XD LOL) I wish for happier years for you both!

@Eunice- Thanks, Eunice. :) Are you willing to be the producer of that movie? :))

@Alyzza: Why not take the possibility? And Joyce and Ken become the mediators. HAHA.

HEYY. Why do you guys keep on mentioning next year's celebration?! :))

I'll go get a nice producer for that. HAHAHA.

@the terminator Of course there will be a next year! This time, are you going to invite us? So we could bring gifts like rice cookers, you know. Wahaha.

@pyrotechnics Why do you insist on tagging along?! Will you buy your own plane ticket? Hahaha. I don't think we're going somewhere this summer. Poor you.

@the terminator - It's a given that there will be a 4th year after the 3rd year. Haha. I'll bring my welcome mat as my gift!

@nemesis- A rice cooker? Heyy. That's a pretty cheap gift considering you're one of my best friends. :))

@pyrotechnics- Umm...We already have a welcome mat. Give us something else. Like a car or a water bed. LOL.

@the terminator Well, it's a good start. If ever, I think I need a microwave oven, lol. Why are we suddenly talking about wedding gits? Haha.

water bed it is. haha. yes, we are all planning ahead.