Louie, I miss you

This morning, right after my driving lesson with Daddy, I went back to my room to rest. It was way too early for me. We started driving at around 6:30 a.m., and I had to drag my body out of my bed to make it possible. I know I shouldn’t have watched last night’s Harapan since I had long ago decided to just vote for all the aspiring senators in the Liberal party. Oh well, so much for regrets. Moving on, after driving half-asleep all around the village, I was STILL half-asleep. It’s like I was ‘bangag’ the whole time, and I still can’t believe how I managed to drive well with half of my being still in dreamland. I thank God I didn’t get myself into trouble while driving under a trance. And yeah, I still managed to get a lot of praises from my Daddy. I think he didn’t notice that my eyes were only half-opened then.

And now to get to the whole point of why I’m blogging right now, look at the pictures below: 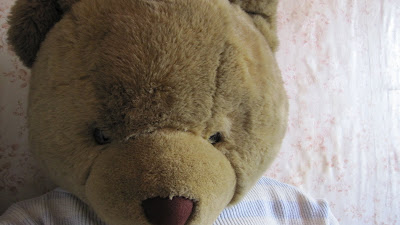 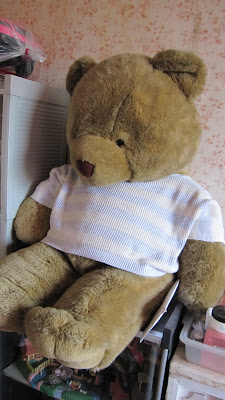 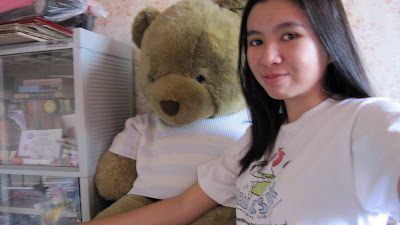 Yes, that’s my Louie. I mean, OUR Louie. Ken gave that bear to me on our first Christmas together. We named him Louie because it was the name written on the bear’s birth certificate. We couldn’t argue with a piece of paper. Nobody can. EVER. You read that?

Louie sounded like an acceptable name to us, so we didn’t bother wasting our brain cells thinking of a clever name for a half-naked bear that was to be our pseudo-bear-son. We might have changed it if the birth certificate said Bruno, Godzilla, or Barabas.

I really miss that bear. I can’t bring him to Manila because he’s too big for my bed. So I just took pictures. FYI, the third one's our first decent picture together. It’s the first time I ever managed to squeeze the two of us in a self-picture. It may be because my arm is longer now, or just because of my new wide-screen camera. Or did Louie get thinner?

So you might be asking, “Why the hell did you write such a long and boring paragraph about you driving half-asleep when all you wanted to do was to show us those pictures?!” My answer is salami.

p.s. I took the picture while I was resting and meditating inside my room.


Woohoo! Saliksik shirt, out of all the pictures. Hehe.

Wow, astig naman. I will try to drive once I turn 18. That is if I have money for a driving school, or do I really have a car to drive though.

Haha! You noticed? =)) You can just ask your daddy to teach you. My dad's teaching me. :D

Mom wants to enroll me in driving lessons so she could have me drive her to the mall or wherever. But I want to learn how to drive soon. :D Maybe you could drive us girls somewhere. Yay!

Yeah, but this driving thing will be monumental because I'll be the first to actually be a "car" driver, since my dad is a driver too... forklifts, though. :))